Thanks to summer schedules, our August meeting to determine the historical significance of three interesting properties – 77 Cotting St, 137 Damon Rd and the “Bocelli’s” commercial building at 368, 370 and 372 Main St – will be Tuesday, July 31 7 PM in room 201 of Medford City Hall. A little more on the process, here. 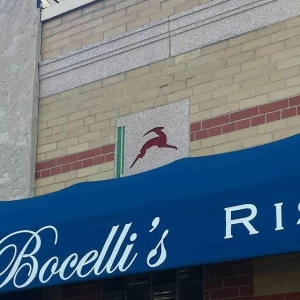 Although the image above was basically just swiped off the internet, it does show the art deco lettering of the old DePasquale’s facade, just barely peeking out from under the Bocelli’s sign.

And the photo left shows the little art deco antelope on the facade, a symbol of agriculture and abundance.

More information about the individual properties can be found below as follows:

The Historical Commission received applications for demolition permits on houses at 137 Damon Road and 77 Cotting Street.

At the August meeting [now scheduled for Tues July 31 7 PM], the commission will determine the historical significance of these houses. If the houses are found historically significant, there will then be a public meeting in September where a demolition delay may be imposed. At this public meeting, neighbors will get the chance to meet with the owner and discuss their concerns about the property.

The Historical Commission also received an application for demolition for the commercial buildings at 368, 370, 372 and 374 Main Street. That building is home to Bocelli’s restaurant, previously DePasquale Bros., and supposedly the first restaurant in the region, outside of Boston’s North End, to serve pizza!  The building now also houses the Backstreet Salon and Jason Anthony Formal Wear.

The process is the same for commercial buildings.