We’ve also published our meeting dates for 2020 – the Commission will continue to meet on the second Monday of every month (except October, when we meet on the third Mon) at 7 PM in Room 201 of City Hall.

If you missed our November info meeting about the Brooks Park, or if you just want to take in all that information more slowly, we now have the presentation slides available to share!

Maps, and the history of the property’s ownership and uses, were discussed by landscape architect Peter Hedlund.

Richard Iron, a masonry preservationist gave an analysis of the present condition of the Old Slave Wall (with photos), and some general history of bricks and brickmaking in New England (with bricks!).

Finally, the archeological potential of the site was discussed by Suzanne Cherau, a Senior Archeologist and Principal Investigator from the Public Archeology Laboratory.

The videos of each presentation are coming soon – the audio is helpful to listen to as you flip through the slides.

We’ve set our 2020 Meeting Dates – the Commission will continue to meet on the second Monday of every month (except October, when we meet on the third Monday) at 7 PM in Room 201 of City Hall.

The next meeting of the Medford Historical Commission is Mon, Dec 9 at 6:30 PM in City Hall. Agenda is available here! We’re starting a little earlier than usual.

Here’s the agenda for this month’s meeting – 421 High St, the former Cincotti’s property, will be discussed: November Agenda.

We’ll also be reviewing our ongoing neighborhood survey, and our CPC projects. If you haven’t given us your thoughts on improving the Thomas Brooks Park, please do! Our survey questions are here, too – Thomas Brooks Park Survey

At our October meeting, the buildings at 96-102 Winchester St, near Ball Square, were found to be NOT historically significant and a demo permit was granted. 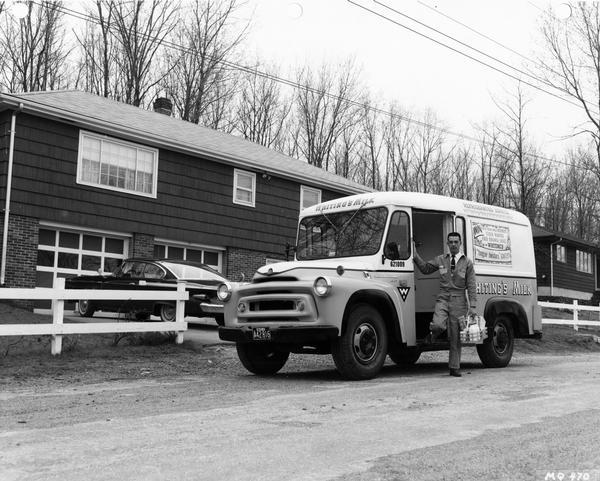 Photo from the collections of the Wisconsin Historical Society, dated 1961

The Whiting Milk Company, active between 1857 and 1973, was one of New England’s first distributors of milk and dairy products door-to-door. It was established by David Whiting (born 1810) in 1857. Whiting’s father, Oliver, owned a large farm in Wilton, New Hampshire. “With the advent of the railroad to Wilton, Mr. Whiting [David] inaugurated operations in the milk contracting business for the Boston market…”

Map from the USDA publication, “The Milk Supply of Boston” 1898

The firm was carried on by his son Harvey Augustus Whiting (1833-1903) and grandsons Isaac Spalding, George, John Kimball, David and Charles Frederick (1875-1972); Charles Frederick used his Harvard (1897) and MIT training to manage the dairy in a modern sanitary manner. Under the direction of David Whiting’s grandsons, the company merged with C. Brigham and Elm Farm Milk (both included in above map) to form a new corporation that, according to the Cambridge Chronicle of 1922, “employs more than 1000 persons and is one of the largest milk distributors in the country.”

In the 1950s, H.P. Hood and Sons and the Whiting Milk Company competed for the majority of the Boston milk market; the photo of the Whiting’s Milk truck at the top of the post is dated 1961. But the business of delivering milk and other dairy product suffered a national decline, due to increased consumer mobility because of automobiles. The company went into bankruptcy in 1973.

Still, most commissioners felt that the history of this company was not reflected in, or represented by the structures on the property at 100 Winchester St. Information above was adapted from the Form B for Winchester St_96-102.

Our October Agenda is now available! Join us to for discussions of High St and Winchester St, plus our usual business.

The Agenda for our next meeting, Mon Sept 9 at 7 PM is now available here. We have been asked to comment on plans for the Lawrence Memorial Hospital site. Although we have not seen full plans yet, discussion is on the September agenda, and the plans should be available to share with the public at our September meeting.

And you can always find past meetings’ agendas and minutes on our website.

As it happens, Medford’s Historic District Commission is currently operating two members short. If you’re interested in working to preserve Medford’s historic neighborhoods – including the recently discussed Forest St – please be in touch and we can answer any questions about their role, and ours. To apply send a resume and letter of interest to info@medfordhdc.org.

The home at 109 Forest St was determined to be preferably preserved at our August public meeting.

When a building is found to be “preferably preserved” an 18 month delay of demolition is imposed, to give the applicant time to consider sale, renovation, reuse, relocation and other alternatives to demolition. The 18 month delay, in this case, also allows time for the neighbors, and the Historic District Commission, to develop plans for a potential Forest St Historic District, which could protect the house, and its neighbors, from demolition.

The applicant is invited to return to the Commission’s upcoming public meetings to present plans and alternatives, and to discuss the preservation concerns that their neighbors and the commission have. If, in any case, a plan is developed that addresses the concerns of the public and the commission, a demolition delay may be lifted before the 18 month period.

Thanks to the Medford residents who filled Alden Council Chambers to share their thoughts and concerns. Thanks too to residents who contacted us in writing. Everyone we heard from strongly supported preserving the house.

For a review of public comments, and details on the decision, please see our forthcoming meeting minutes.