The 40B development proposed for Mystic Ave has been getting a lot of attention, and public comments have been extended for two weeks. Please contact the Office of Community Development with yours! To read ours, click below –

Because the project is 40B, Combined Properties can, effectively, bypass the demo review process of the Historical Commission. The MassDOT Sign Shop might not look like much now, but the building is older than 75 years and it’s a solid brick building, where fabrication work – for signs used on our roads state-wide – was done for many years.

In the early 20th C the factory buildings of the New England-Anderson Brick Works (which had seen various tenants in the meantime), were taken over by the Worcester Paper Box Company. This company produced paper packaging for a wide range of household products including sugar, tea, coffee, and shoes. Founded in 1914 by Harry Posner, the company had been located in Worcester before its move to Medford. Posner (1881-1962) was born in Mohilev, Russia and emigrated to the United States in 1900, fleeing the pogroms. He first moved to New York, and then to Worcester, where a friend loaned him money to start a company making shoeboxes. After moving his business to Medford in 1927, Posner and his wife Hannah lived at 104 Traincroft Road, off High Street.

Posner was honored in 1938 by President Franklin Roosevelt for his “enlightened labor policy.” Posner’s paper box company helped to finance workers’ homes and their children’s educations, among other employee benefits. In the 1940s, Posner founded Medford’s Combined Jewish Appeal, which he chaired for over two decades. In 1953 Posner made international news with a $1 million donation, earmarked for medical education, to Tufts University, one of the largest donations that university had ever received. He explained then that the gift was “part payment of the blessings we enjoy in this land of freedom an opportunity.”  By 1958 his company employed over 300 people at the Medford plant, and later that year Posner bought the buildings of the New England Bedding Company, next door.

The buildings of the New England Bedding Company formerly housed the Glenwood Dye Works, a second turn of the century factory still standing today on the site of the planned 970 Fellsway redevelopment. 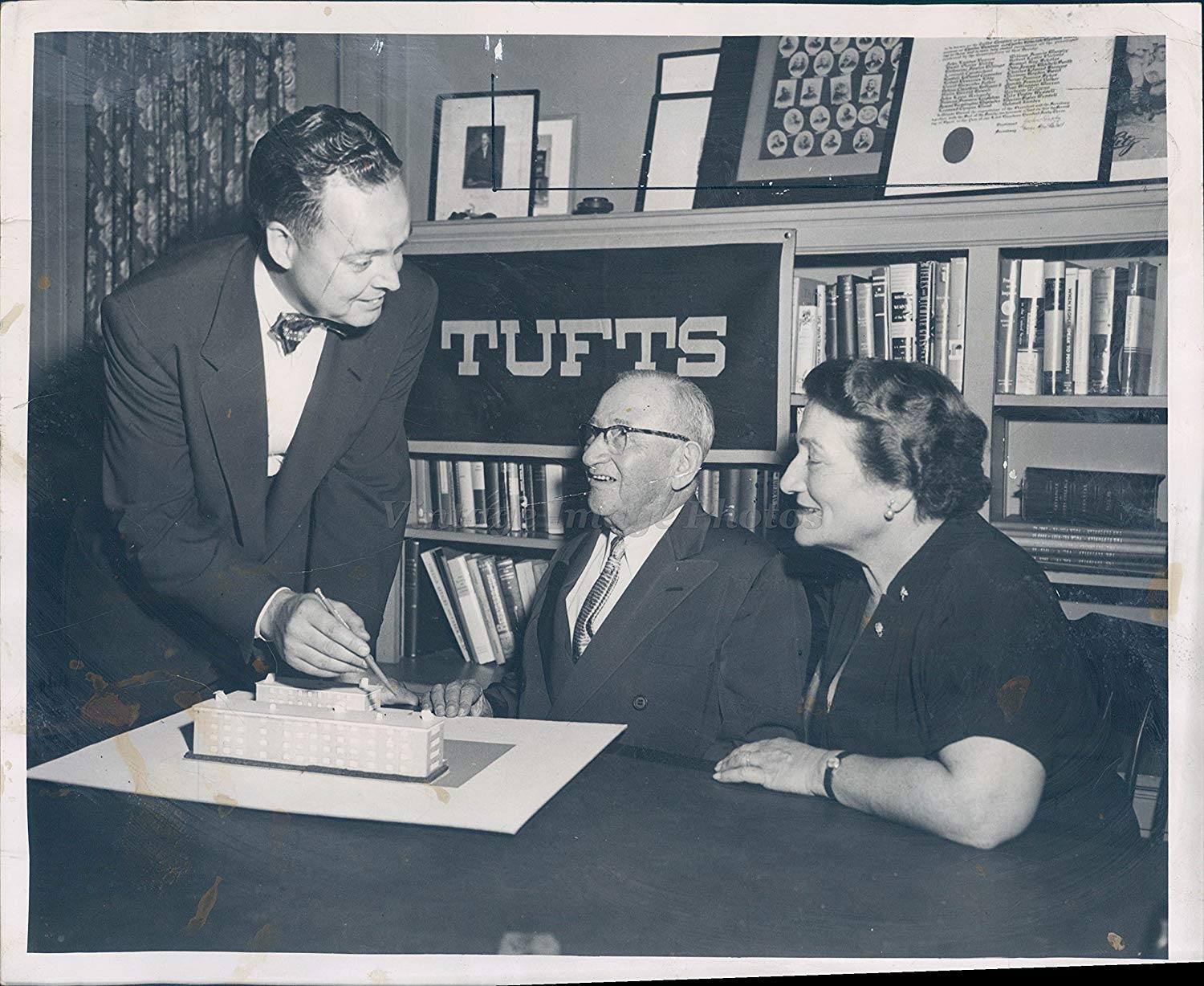 Tufts President Nils Y. Wessell,displays a model for the Posner Hall dormitory at the Tufts Medical School, for Harry and Hannah Posner, c. 1954

The additional 130,000 square feet of the former Glenwood Dye Works allowed the company to remain in Medford during a period of expansion and transition. In March of 1961 Posner’s company was acquired by the Federal Paper Board Company and once merged, Federal Paper Board called the Medford plant one of their “most efficient and well organized units, serving some of our finest and largest customers.” Federal Paper Board, founded in New Jersey in 1916, had aggressively expanded throughout the twentieth century by buying numerous mills and factories. The company was listed on the New York Stock Exchange in 1953 and growth continued apace. The Medford facility was one of several purchased in 1961; in addition Federal Paper Board constructed the world’s largest paperboard mill in Sprague, Connecticut that same year.

The Federal Paper Board Company’s earnings were seriously affected by the 1970s oil embargo. This combined, in 1977, with poor weather conditions and a drop in wood pulp prices. That year the company shuttered two of its carton plants – the Medford, Massachusetts plant and one in Pennsylvania. Around 500 people lost their jobs between the two closures. After Federal Paper Board’s departure, the complex was converted for use by numerous smaller businesses and is still in use today.

The first major industrial building in the Glenwood area was the 1886 construction of the New England-Anderson Pressed Brick Works (970 Fellsway).

That company was founded in 1877 by James C. Anderson of Chicago; the Medford plant was opened in 1886. The company was well known in the 1880s, a period marked by its innovative use of architectural brick work. Anderson credited itself with developing products that were “full of artistic beauty and capabilities” out of a material more commonly associated with plain buildings. Anderson brick was said to have been used on some of the best buildings of the period, including over 100 buildings in New England, and was well known throughout the US and in Europe. 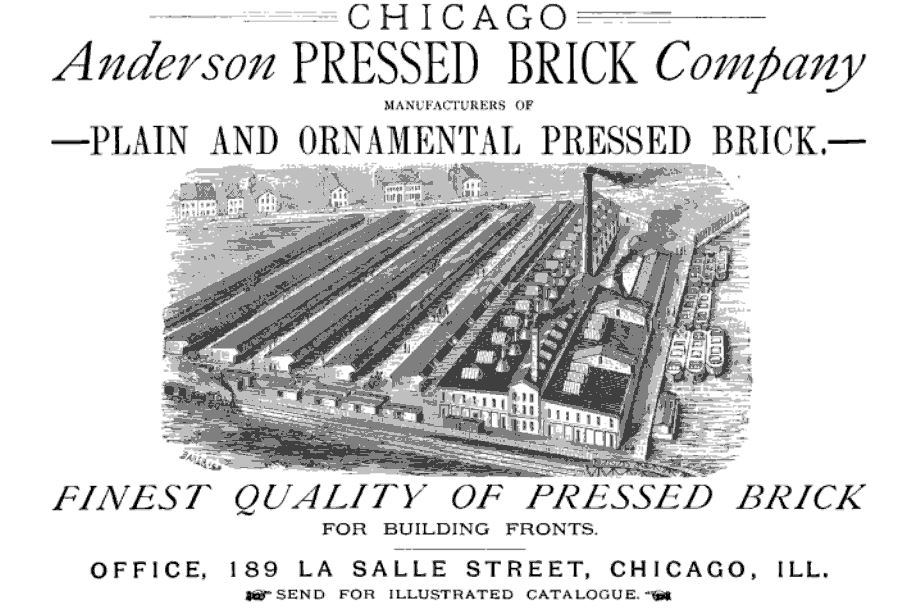 The Medford facility, which employed 75 workers in 1889, was one of three of the Anderson Company – the other two were in Chicago and New York. At their three plants, the Anderson Company produced a total of over 300,000 bricks a day in the 1890s, through a highly mechanized system they developed in-house. Green, unburned bricks were led through a series of tunnel kilns, heated by a perpetual fire fed by crude oil and hot enough to melt steel. The Glenwood facility alone contained eight steam-powered kilns. The quantity of bricks produced in this manner represented a major fuel efficiency over conventional brick production.

The New England-Anderson Pressed Brick Works followed a robust brick-making tradition already established in this part of Medford. Brick production took place here as early as the mid seventeenth century, and it was Medford’s chief business for over a century during the colonial period. By the nineteenth century the Bay State Brick Works, later the New England Brick Works, produced tens of millions of bricks annually at a large plant on the western side of Riverside Avenue.

But the New England-Anderson Brick Works seem to not have occupied the Glenwood buildings long. A newspaper report in 1896 referred to empty buildings in the area. In fact, the vacant factory had attracted the attention of the police, who broke up a major dog-fighting ring in the building in March of that year. The factory’s distinctive architecture, consisting of a large room adjoined by many small windowless kilns, provided numerous hiding places that hampered the police in their effort to pursue the criminals.

Forty-four people were arrested in a raid on the facility and one was shot and fatally wounded while trying to escape. The dogs, still fighting at the time of the raid, could not be separated or subdued and were also killed. All arrested pleaded guilty and were fined between $20 and $25. Two years later the complex was property of the Attleboro Savings Bank.

(Most of this history is taken from our surveyor’s Form A for the Glenwood Industrial Area, available here.)

As we’ve mentioned here before, the Historical Commission is often asked for “site review” comments on potential redevelopment projects. Three of our commissioners attended a site visit at 970 Fellsway (near Amaranth and Myrtle Streets) last week and took these lovely photos. 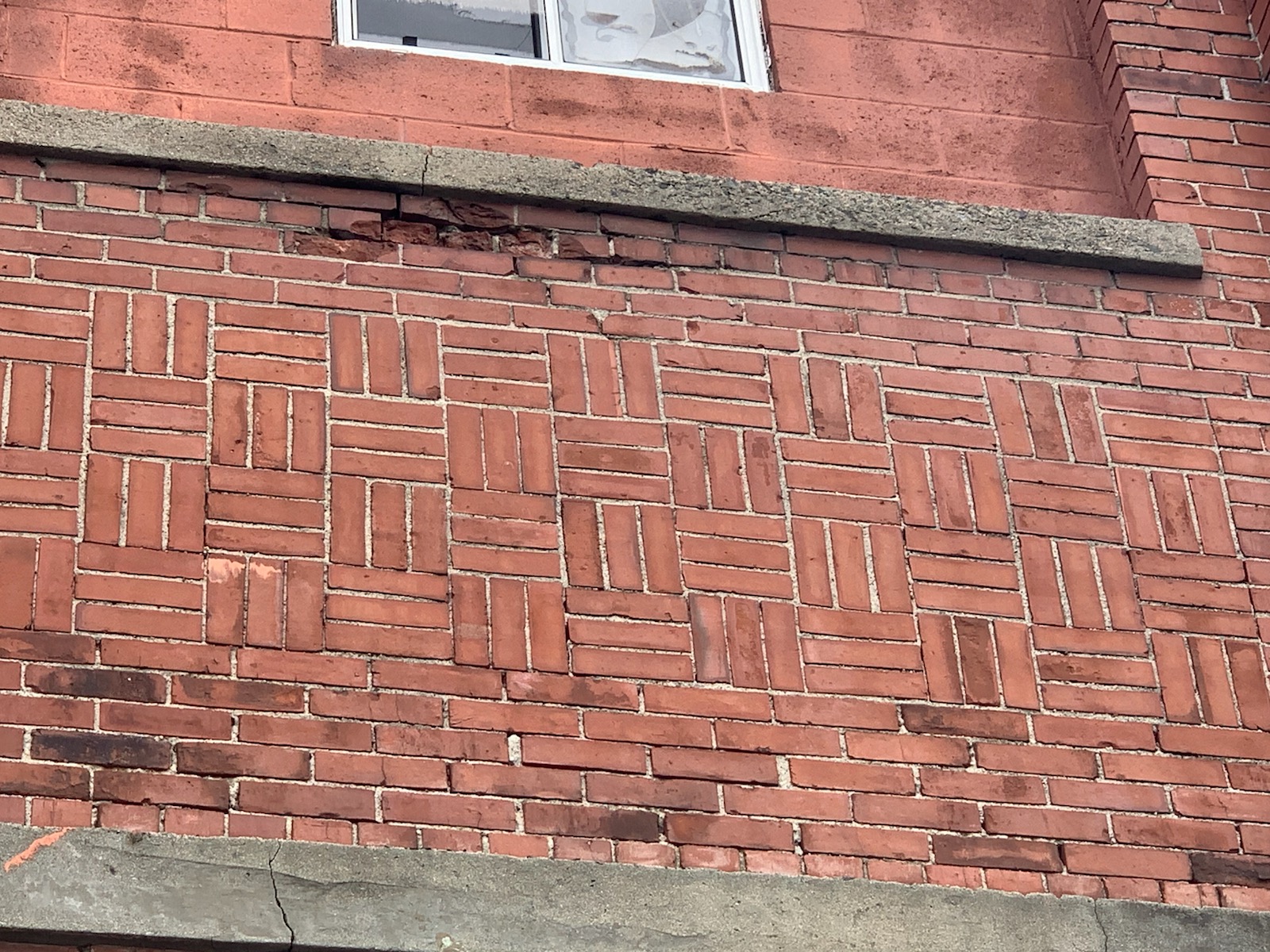 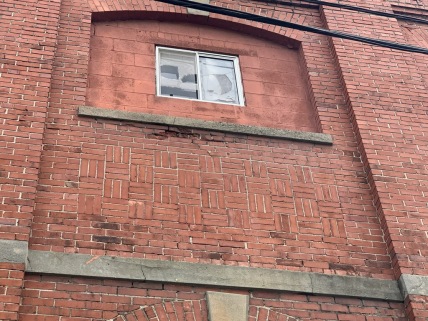 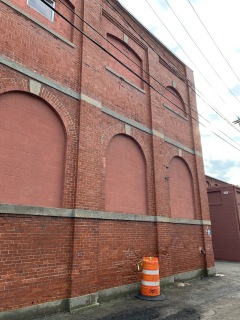 But why all the beautiful parquet brickwork at this old Glenwood industrial site across the street from BJs? What’s the story and is it worth preserving?

Plans are available for public comment through the Office of Community Development at Medford City Hall.

The Office of Community Development has also recently asked the Historical Commission for feedback on plans for a residential development at 4000 Mystic Valley Parkway, directly across from the MacDonald Park.

The developers have submitted their MassHousing application form for Site Approval for a “Chapter 40B” residential development, and a copy of this application goes to the City of Medford.   Application, with plans, here. 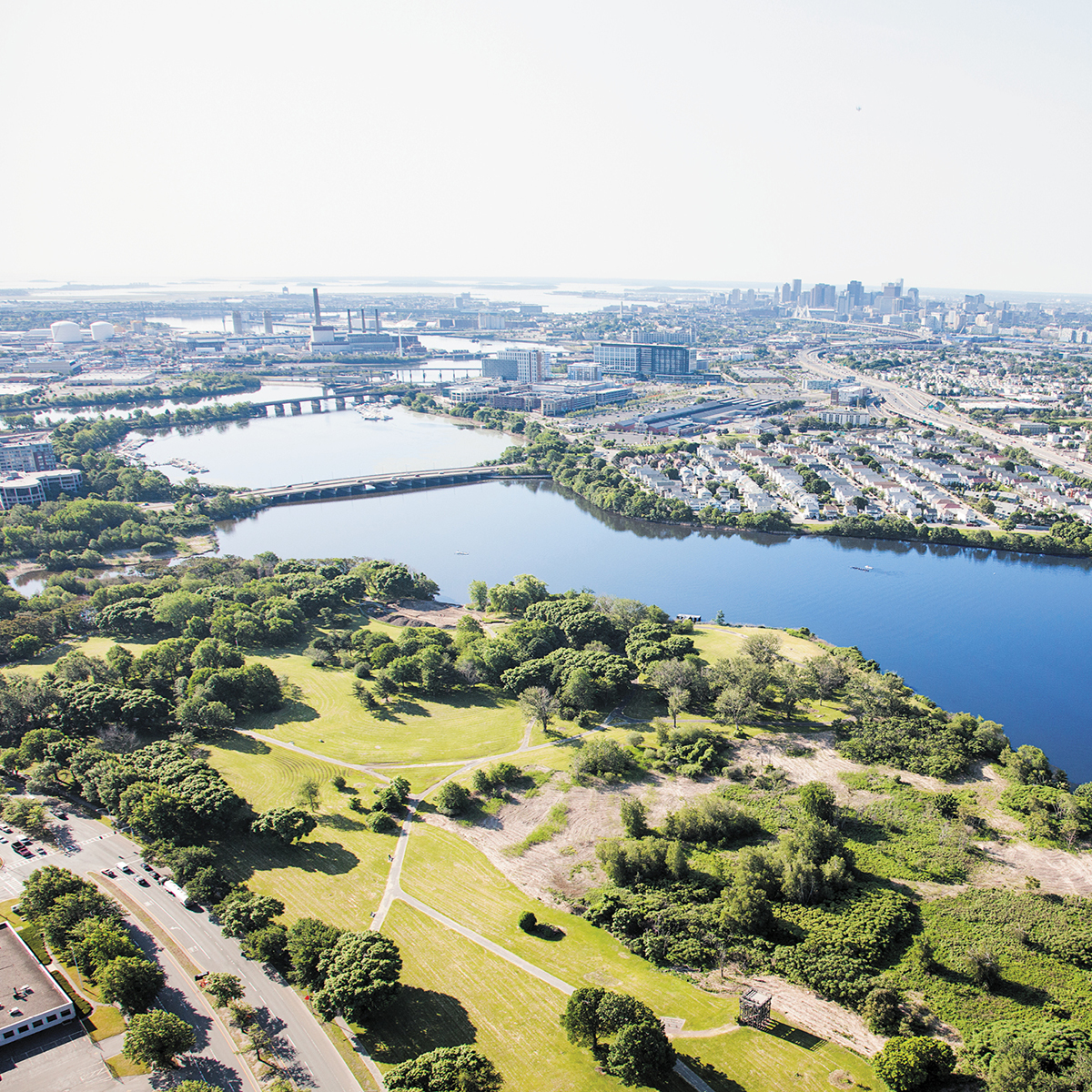 Plans are available at City Hall Office of Community Development, where the public can review them and submit comments.

Medford’s Office of Community Development (OCD) regularly asks the Historical Commission for Site Review comments on redevelopment throughout the City of Medford. The OCD also asks for comments from the Fire Department, the Department of Public Works and the City Engineer, the Building Commissioner, the Conservation Commission, the Office of Energy and Environment, and the Superintendent of Public Schools.

Medford’s Office of Community Development (OCD) regularly asks the Historical Commission for Site Review comments on redevelopment plans throughout the City of Medford. The OCD has, recently, asked us for feedback on the plans (available here) for the Lawrence Memorial Hospital site, on Lawrence Road and Governor’s Ave. 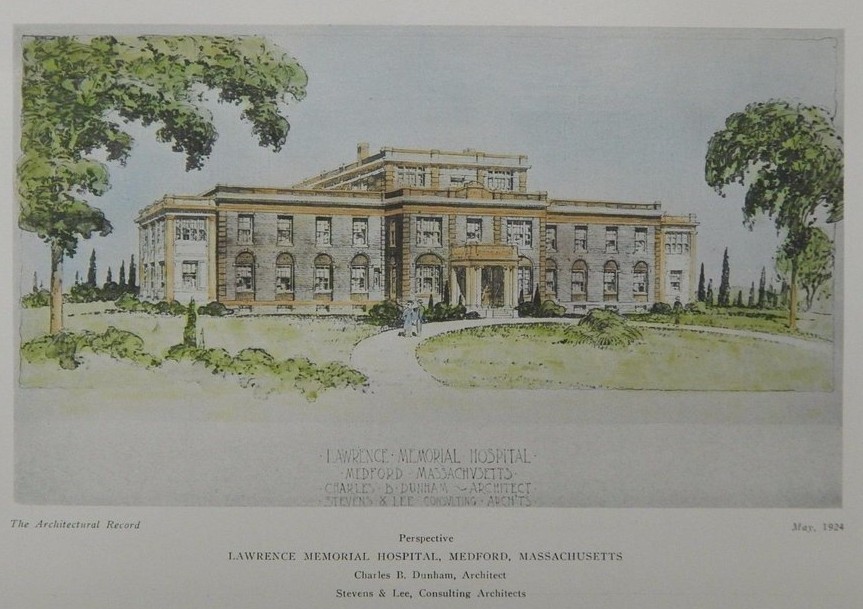 The OCD also asks for comments from the Fire Department, the Department of Public Works and the City Engineer, the Building Commissioner, the Conservation Commission, the Office of Energy and Environment, and the Superintendent of Public Schools.

Plans are available at City Hall Office of Community Development, where the public can review them and submit comments as well. 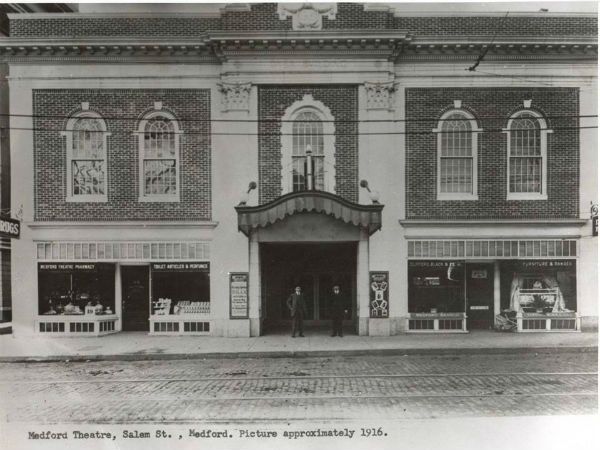 The Medford Theatre was built in 1915 as a theater for stage performances and the then new-fangled cinema. Also called the Dyer Building, it was designed and constructed by local architect Michael A. Dyer – his firm later built our City Hall.  The building’s rear and interior have undergone numerous alterations and currently, Medford residents practice yoga in the original “Lodge Hall,” the spacious meeting hall on the second floor, where the large, arched windows overlook Salem St.  The Dyer Building changed hands in 2018, and there are now plans to renovate it into a larger residential development, while preserving the Georgian Revival facade. These plans are currently on view in the City Hall Office of Community Development – check out the plans there and submit your comments to them. Postcard image via Inside Medford. 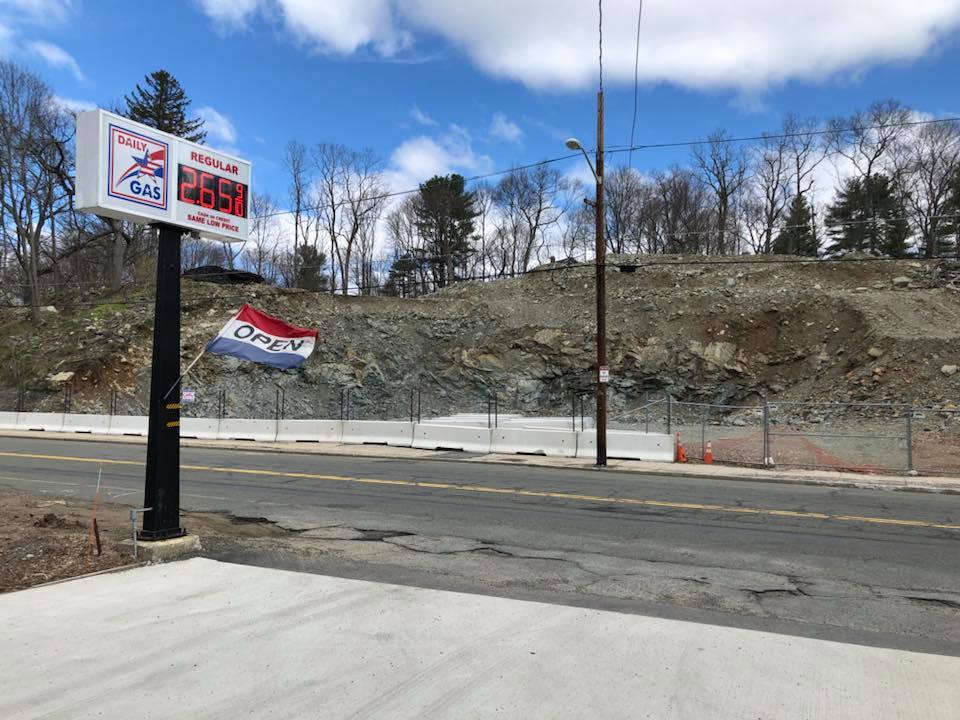